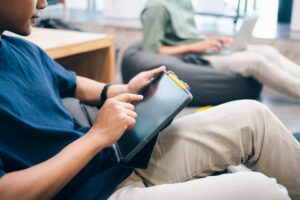 More than half of UK businesses in a recent survey confirmed that having the right tools or technologies in place is their biggest challenge when considering long-term ‘work from anywhere’ policies.

This is in stark contrast to the nearly 80 percent that plan to maintain remote or hybrid working in 2022, with employees expected to spend between one and four days in the office.

This is according to a new report from Absolute Software, the leader in self-healing Zero Trust solutions, titled ‘The Future of Work.’ The report’s findings are based on a survey of 400 UK and US business leaders regarding their attitudes to remote working in 2022 and beyond, and revealed security flaws in a majority of the businesses’ approach to IT operations and device visibility.

Two in five UK decision makers believe that remote workers leave their organisations more exposed to risk thanemployees office-bound counterparts. The same number also cited risk and compliance management as the biggest drawback to remote working, and almost one in four stated that distributed employees are more likely to expose themselves and their organisations to greater risk.

The survey also discovered that only 41 per cent of these organisations have complete visibility, control and remediation over work devices, while the lion’s share have only partial visibility and control – leaving IT managers in the dark about security lapses, system breaches and data management practices.

Similarly, only 45 per cent of UK businesses have a workforce which exclusively uses devices owned and managed by the IT team, whereas 55 per cent use work devices that are owned or provisioned by employees to at least some extent, representing major business security risks.

Ed Blake, Area Vice President of EMEA, at Absolute Software commented: “Businesses have had almost two years to adapt to decentralised working environments, but as they increasingly embrace a ‘work from anywhere’ world, short-term Band-Aid solutions to security and productivity holes need to be filled with more permanent fixes.

“Now that so many of us work outside the traditional office using cloud-enabled applications, it makes little sense to rely on legacy perimeter-based security tools designed for a world that no longer exists. Organisations today need a modern security architecture in which each individual endpoint is resilient, backed up by a self-healing, zero trust network.

“With firmware embedded in over 500 million devices around the world, Absolute enables a permanent connection to every endpoint and delivers continuous visibility, control, and intelligence across devices, data, applications, and network connections.

“The ultimate goal should always be to keep employees and their devices safe, no matter where they choose to work, without compromise.”