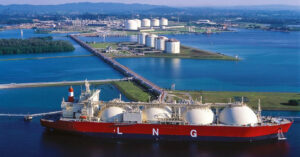 THE Department of Energy (DoE) said on Thursday that at least two liquefied natural gas (LNG) projects are on track to start operations next year.

“(With) scheduled availability at the end of the first quarter of 2023, liquefied natural gas is considered an important source for fuel diversification,” Energy Secretary Raphael P.M. Lotilla said in a statement.

Last month, Atlantic Gulf & Pacific Co. (AG&P) said it has completed the conversion of a vessel into a floating storage unit, which will then be docked at its LNG facility in Batangas.

AG&P is expecting to deliver gas by March. Its import terminal has an estimated initial capacity of five million tons per annum (MTPA).

Meanwhile, First Gen Corp., through its subsidiary FGEN LNG Corp. has announced that its LNG terminal will also be completed by the first quarter. According to the DoE, FGEN’s LNG terminal has a total capacity of 5.26 MTPA and an estimated construction cost of P13 billion.

“Our foremost concern is to ensure that there is enough capacity supplied through various sources most especially in the coming summer months to sustain the power supply,” Mr. Lotilla said.

The DoE said last month that red and yellow alerts are expected on the grid in early 2023, signifying periods when available power falls below acceptable safety margins.

The Luzon grid is dependent on gas landed in Batangas from the Malampaya field in northern Palawan. The depletion of Malampaya gas has forced gas-fired power plants to import gas, for which they must build storage facilities.

The DoE is positioning natural gas as a transition fuel necessary to supply cleaner-than-coal baseload power while the renewable infrastructure is built up. Renewable energy also suffers from intermittency problems because they cannot generate power in certain conditions, such as windless days for wind turbines or nighttime for solar panels.

Under the Clean Energy Scenario of the Philippine Energy Plan, the government is aiming to increase the contribution of natural gas power by establishing LNG terminals and regasification facilities.

The Power for People Coalition said in a statement that LNG facilities raise environmental concerns that will affect host communities.

“LNG is a burden for consumers, especially now when global gas supplies are (at) record-high prices. Just a few days ago, the Japanese trade ministry came out and said long-term LNG contracts are sold out. Whatever supply we find will be very costly, especially during the upcoming summer peak season,” according to Gerry C. Arances, P4P convenor. —  Ashley Erika O. Jose