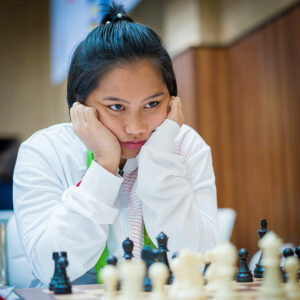 JANELLE Mae Frayna pounced on the time-troubled Laura Unuk’s end game blunder as she powered the Philippines to a shock 2.5-1.5 win over a heavily favored Slovenia in the eighth round on Saturday night and back into 44th World Chess Olympiad contention in Chennai, India.

With her team tied at 1.5 apiece and her position still has a potential for a draw despite going a pawn down, the country’s first Woman Grandmaster (WGM) persisted and went for a lucky punch that caught Ms. Unuk straight to the face after the Slovenian succumbed to deep time pressure and blundered away an easy split.

It sealed the giant-sized triumph for the Filipinas, who are being sponsored by the Philippine Sports Commission, and a place in the Top 20 as they are currently jammed at 17th spot with nine others with identical 10 match points.

WIM Marie Antoinette San Diego tried to salvage a draw from a losing position but fell short in the end and succumbed to WIM Lara Janzelj on board three.

Woman FIDE Master Shania Mae Mendoza has replaced Ms. San Diego in the roster as the country fights a powerhouse, 12th seed Hungary in crucial ninth-round showdown at press time that would make or break its bid for a best finish in this 11-round biennial event.

MEN’S TEAMIn the men’s side, GM Banjo Barcenilla fell short in his bid to salvage a draw and lost to GM Nikolaos Theodorou on board two that sealed the Filipinos’ heartbreaking 2.5-1.5 defeat to the fancied Greeks.

GMs Mark Paragua and John Paul Gomez and IM Paulo Bersamina all drew their respective foes on boards one, three and four, respectively.

The stinging result sent the country down into a 22-country logjam at No. 35 with 10 points.

They were playing the higher-rated Georgians at press time. — Joey Villar