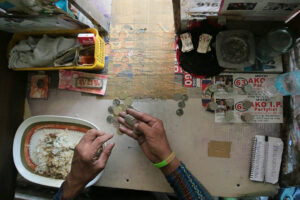 COMMUTERS pay for their ride at a jeepney terminal along Visayas Ave. in Quezon City, March 16. — PHILIPPINE STAR/ MICHAEL VARCAS

FILIPINOS are now experiencing a sharp and sustained rise in prices of food, fuel, electricity and almost everything else.

As inflation hits Filipinos’ wallets, many are now looking for ways to stretch their hard-earned peso as far as they can.

Mayzel D. Revuelto, a 33-year-old call center agent, was shocked to see her electricity bill hit P1,200 in May — a 50% increase from the previous month’s P800 bill.

“It seems that everything has become even more expensive,” the resident of San Mateo, Rizal said in Filipino in a phone interview. “The price of the 2.7-kilogram (liquefied petroleum gas) we buy every month has gone up to P270 from P190. Our P1,500 budget for groceries for two weeks before is now just enough for one week.”

Inflation is expected to continue to accelerate amid higher forecasts for global oil and commodity prices, and the approved provisional jeepney fare hike. The BSP raised its average inflation projection for this year to 5% (from 4.6%) and for 2023 to 4.2% (from 3.9%).

A small family with an eight-year-old child, Ms. Revuelto and her husband, who works part-time, are now looking for other sources of income.

“We have no choice but to tighten our belts during these hard times,” she said, adding that she had to dip into her savings to make ends meet.

Reynald B. Imperial, a 26-year-old salesman at an electronics store in Marikina City, said he decided to leave his apartment in February and move in with his uncle’s family to save on rent.

Mr. Imperial, who benefited from the recent increase in daily minimum wage, said he noticed a “slight” increase in electricity and water bills to P900 (from P800) and P500 (from P300), respectively.

To cope with the soaring prices, Mr. Imperial said he stopped buying clothes from pricey online stores and instead, orders on Shopee. He also walks to work, allowing him to save P20 per day on jeepney fare.

“I expect — but not too much — another wage increase so I can save more for the future,” he said.

“What will consumers do to cope with these price increases? I believe consumers just need to use their inner gut feel… If the consumers cannot afford to buy the item, then don’t buy it,” he said in a statement.

He said the P33 hike in daily wages in Metro Manila was not felt by the laborers due to the “big-time” fuel price hikes. Commuters also had to pay a peso more for jeepney fares.

Ding Q. Antonio, a 39-year-old Quezon City resident, drives a jeepney at night but the soaring price of diesel has made it difficult to earn enough for his family’s daily needs. He used to earn around P700-P800 a night, but this has now fallen to around P400-P500 a night.

So, he started working as a construction worker during the day, earning P500 per day or P3,000 per week.

“I have no choice but to do two jobs every day, because I can’t support my family just by driving a jeepney,” he said in Filipino.

Mar S. Valbuena, president of the Samahang Manibela Mananakay at Nagkaisang Terminal ng Transportasyon, said the minimum jeepney fare should have been raised to P15 instead of P10.

“Not all of us benefited from the service contracting program. It would have been a big help for all transport workers if they raised the fares for all modes of public transportation,” he said in a phone interview.

CHANGING JOBSAnicito Z. Lagos, 46, quit his job as a taxi driver and will start a new one as a family driver on July 1. As a taxi driver, he typically spends P1,800 on fuel and P850 for the operator per day, so he takes only around P600, less than half of the P1,400 he would earn before the pandemic.

A breadwinner, Mr. Lagos said daily survival requires “diskarte” since he sends money to his wife and four children in Bohol.

Mr. Lagos said working as a family driver is his best option, as he will have a fixed salary, meals and accommodation.

For now, he asks for tips from his passengers. “I think they understand my situation.”

The Philippine National Taxi Operators Association has been asking the government to increase the flag-down rate to P60 from the current P40.

“Many fleet operators sold their units already due to pandemic restrictions and driver shortage,” Jesus Manuel C. Suntay, president of the association, said in a phone interview.

‘BAWAS-DAGDAG’
Wealth coach and book author Chinkee Tan said there are two ways for Filipinos to cope with the higher cost of living.

“It’s through using the ‘bawas-dagdag’ (reduce-add) method,” he said in a phone interview. This involves cutting back on unnecessary expenses and prioritizing what one really needs.

Mr. Tan said it is important right now to be more practical. “Rather than looking for branded things, you might look for alternatives that are less expensive… Look for cheaper ways to do things,” he noted.

Filipinos also need to save more, especially for emergency funds that cover at least six months of their living expenses.

“Because of the pandemic, we may never know, hopefully not, that there will be another surge… Once it persists, there will be some limitations again and, at the same time, some people will have a problem earning on a daily basis,” Mr. Tan said.

Filipinos should also consider other ways to augment their income, such as online gigs such as writing, graphic design or video editing, he said.

For people who are entrepreneurial, he recommended getting into the food business.