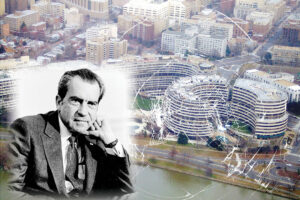 The country that every survey says Filipinos trust the most marked, on June 17, the 50th year of the 1972 Watergate scandal that led to the resignation of then US President Richard Nixon in 1974.

Its anniversary occurred in the middle of a US Congressional investigation into the Jan. 6, 2021 “insurrection” during which a mob of several hundred white supremacists and neo-fascist thugs tried to forcibly prevent the official certification of the victory of Joseph Biden in the November 2020 Presidential elections.

Watergate was an office building in Washington, DC that housed the Democratic Party’s National Committee (DNC). Five men broke into the DNC offices in June 1972 to photograph campaign documents and install wire-tapping and other listening devices. But they were apprehended and their connection to Nixon’s Committee to Re-elect the President (CRP) was established through, among other means, a series of investigative journalism reports by Washington Post reporters Robert Woodward and Carl Bernstein which they later republished in book form with the title All the President’s Men.

A Congressional inquiry found that Nixon had approved the criminal act and was legally accountable. Rather than risk impeachment and prolong the crisis, he resigned as US President on Aug. 8, 1974.

The conjunction of the commemoration of the 50th year of the scandal with the ongoing investigation and hearings by the January 6th Congressional Committee on what has  been described as “an insurrection,” an “attempted coup,” and “an attack on US democracy” has invited comparisons between then and now.

In interviews with US media, Carl Bernstein, now in his 70s, said that the difference between the 1972-74 crisis and the current situation in the US is that “the system worked” then, but is currently failing.

During that time the media closely followed the issue and in fact managed to find evidence that showed Nixon knew about and approved the break-in. The US Congress diligently did its job of getting at the facts, with both Republicans and Democrats working together. The Courts ruled that Nixon had to surrender to Congress the tape recordings from his White House office in which he and his co-conspirators discussed the break-in. And 60% of the US population believed that he should either be prosecuted or impeached, or should resign.

In contrast, despite the January 6th Committee’s findings that the 2021 attack on, and occupation of US Congressional offices was egged on by former President Donald Trump so he could stay in power, only a handful of Republicans have condemned him and called his claim that there was fraud in the 2020 elections a lie.

Some police officers were killed and injured during that attack, which endangered Trump’s own Vice-President Mike Pence, House of Representatives Speaker Nancy Pelosi, and several other congresspersons and senators from the Democratic Party. But a number of Republicans who support what much of US media refer to as “Trump’s big lie” that Biden and the Democrats stole the election are likely to win the Republican primaries — which decide who the party will run in this November’s mid-term elections for state governors and members of the US House of Representatives — over those who don’t.

Neither is there unanimity among Americans that Biden defeated Trump in a fair and honest election in 2020 — and rather than withdraw from public life as Nixon did, Trump is likely to run for President again in 2025. Because he has the support of most Republicans, and his base is still intact, he could recapture the Presidency then, and further feed the violence and hate that afflict so much of US society.

The US is deeply divided, even as gas prices soar, mass shootings threaten communities almost every week, and the inflation rate surges to nearly unprecedented levels. In defense of its global hegemony, the world’s only remaining superpower is also waging a proxy war in Ukraine against Russia.

Founded in 1776 and now 246 years old, the United States of America is supposed to be a mature democracy. But it is nevertheless in the throes of the economic and political crises that are usually perennial conditions of life only in the Third World countries of Asia, Africa, and Latin America.

But more troubling than the economic difficulties its citizenry is experiencing are the challenges its democratic institutions face, whose consequences are likely to affect the way the US is governed for years to come. Those challenges are due in large part to right-wing greed for power, in combination with the misinformation and disinformation that afflict vast sectors of its population.

If those two factors sound as if they are equally the causes of the weakness if not the outright demise of democracy in some of the poorest countries of Planet Earth, it is because they are.

As in those other countries, what little is left of democracy has again given way to despotism in the Philippines, and there is little evidence to suggest that it will pass either sooner or later. What recent events have established is that, because of a largely disinformed public among other factors, it is likely to be the rule rather than the exception in the coming decades of the foreseeable future. History indeed repeats itself — and the second time is no less tragic than the first.

Because democratic governance is crucial to economic and social development, there is little hope that the perennial poverty and its lethal consequences on the lives and fortunes of the Filipino millions will ever give way to even the most minimum levels of prosperity. What is likely is that this country will continue to hobble along from one crisis to the next without any change-making solution in sight.

But wait. Much of the rest of the planet is in the same dire straits of mass unemployment, high prices and runaway inflation, social injustice, and lives of quiet desperation, even as global warming threatens the very existence of the entire human race.

The culprit responsible, say those of a liberal bent, is unbridled greed for pelf and power, and the democratization of wealth and governance the solution. But democracy is being blamed by its enemies, whether directly or by implication, for the world’s ills, and curtailed by the very same forces responsible for those infirmities.

Just as Donald Trump uses the US Constitution and democracy to attack both, so does the Philippine oligarchy do the same. In democracy’s name it condemns as “rebels,” “reds,” and “terrorists,” and causes the arrest of those who dare exercise their rights to free expression, peaceable assembly, and the other entitlements the Constitution protects.

The oligarchs have also frustrated every effort at democratizing governance, for example by turning the Party-List System into just another means for them and their surrogates to continue to monopolize State power.

The fall of socialist regimes and the restoration of capitalism in many countries in the 1990s provoked the view that the current stage of history is also its last. The adherents of the theory that liberal democracy is the pinnacle of political evolution are correct: individual freedom and self-rule are the prerogatives of all of humanity. But democracy has never been as imperiled as it is today by the tyrants who rule in its name. Despite the economic and social crises that afflict not only the poorest countries of the world but also the wealthiest, no alternative seems to be available, the only prospect being more of the same.

Rather than repeating itself, perhaps history is indeed coming to an end.