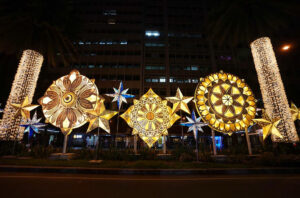 FOR over a decade, lanterns along Ayala Avenue would signal the start of the Christmas season at Makati’s central business district. Families and friends would flock to the Ayala Triangle Gardens to witness the Festival of Lights. That tradition pivoted online in 2020 due to the coronavirus pandemic. Now, after two years, the annual holiday tradition returns onsite on its 14th edition with several new activities.

Ayala Land will welcome the Christmas season at 6 p.m. on Nov. 3 by lighting up the Christmas decor along Ayala Avenue. Traditional Filipino-style holiday decor will adorn the Makati Central Business District. In line with Ayala Land’s advocacy for sustainability, the giant lanterns used last year will be the main element this year.

“We actually wanted to come back last year but we put the safety of the people first,” AyalaLand Head of Marketing and Communications Christine C. Roa said at the press launch at the Ayala Tower One building on Oct. 27.

“We wanted to bring back what they were used to, but because it’s been two years, we wanted to offer something different, something nicer,” she said.

In addition to the decorations in front of Tower One, each bay along the whole stretch of Ayala Avenue will now have more ornaments. There will also be a giant parol installation by the courtyard of Ayala Triangle Gardens to make it easier for those who would like to take pictures close to the decorations.

THE FESTIVAL OF LIGHTSAfter two years of virtual shows, the Festival of Lights show is finally going live again at the Ayala Triangle Gardens beginning Nov. 10.

This year’s show will be a live 360-degree experience. Conceptualized by director Ohm David and lighting designer Sueyen Austero, the familiar dancing string and laser lights with floating shapes will remain, but in addition, a giant 3D animated video will be projected on the canopy façade at the Ayala Triangle Gardens courtyard. The 3D projection, created in collaboration with Kroma and Acid House, will begin the show with a fun and magical introduction to the actual light show.

“We wanted something to symbolize coming together. So, we gathered different indigenous patterns (from around the country) [for the lights show],” Mr. David said.

“Definitely, some will be emotional seeing these lights live again, especially for the children. That’s what we’re looking forward to,” Mr. Austero said.

Three musical medleys (with a running time of five minutes each) will accompany the show. The first medley is an orchestral rendition by the Manila Symphony Orchestra. This will be followed by a TikTok inspired medley which is a collaboration among composers Tris Suguitan, Jazz Nicolas, and Mikey Amistoso. The show ends with a chorale rendition by musical composer Jazz Nicolas, featuring the Pembo Elementary School children’s choir.

“While we wanted to bring back what the people were expecting, we wanted something new,” Ms. Roa told members of the press.

“We did not want it to be just the usual Christmas songs. We wanted it to be more hip, and more danceable,” she said, noting that the TikTok-inspired medley was a new idea brought by trends that emerged during the lockdown.

Still, a Filipino Christmas is not complete without the Simbang Gabi. Masses will be held on Dec. 15 to 23 at the Ayala Triangle. The first evening of the mass will open with a performance by the Philippine Youth Symphonic Band on Dec. 15, 6 p.m.

“Aside from the Festival of Lights, people come here to have their reunions, to see friends, and to bond with family. We want the venue to be very special for them,” Ms. Roa said.

WHAT’S NEW?For the first time this year, Ayala Land, in partnership with the French Embassy, will hold a Christmas Market at Ayala Triangle Gardens from Dec. 2 to 31. Inspired by the Marche de Noele Christmas market in Paris, Lille, and Strasbourg, it will feature French restaurants and products, as well as Filipino artisanal goods.

Ms. Roa said that the rest of the food and beverage establishments at the Ayala Triangle Gardens will open on the first week of December.

The Christmas Market’s launch in Dec. 2 will see performances by French and Philippine children’s choirs, and carnival acrobats.

Ayala Land will also have its first Christmas Holiday Concert in Circuit Makati at the Samsung Performing Arts Theater on Dec. 20 to 22. It will feature performances by the Manila Symphony Orchestra and the Steps Dance Studio, among others. More details will be announced closer to the concert dates.