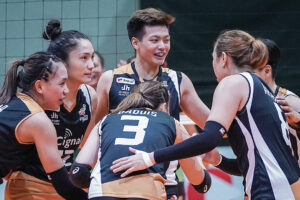 CIGNAL gets a crack at visiting team King Whale of Taipei on Monday with hopes of staying in the finals hunt in the Premier Volleyball League (PVL) Invitational, which goes back to the MOA Arena.

The HD Spikers breathed life to their bid of claiming one of the two spots in the one-game finals slated for Aug. 14 also at MOA after posting their first victory in two games in the semis at the expense of the Army Black Mamba Lady Troopers, 22-25, 25-27, 25-21, 25-19, 15-12, last Saturday in Antipolo.

Riri Meneses is expected to ride the crest of her spectacular 23-hit performance, easily her best game of the conference thus far, that saved the day for the Open Conference third placer.

PHILIPPINE TEAM WITHDRAWSMeanwhile, the league announced on Sunday the withdrawal of the Philippine team after its National University players were not allowed by their team manager to suit up due to fear of potential injuries.

The Nationals were originally scheduled to clash the league-leading Creamline Cool Smashers, who are unbeaten with a 2-0 card, in the main game at 5:30 p.m.

League president Ricky Palou said it would resume the tournament with only five squads instead of six.

The Philippine team was supposed to fill in for Kobe Shinwa of Japan, who pulled out after one of its players tested positive for coronavirus disease 2019 (COVID-19). — Joey Villar