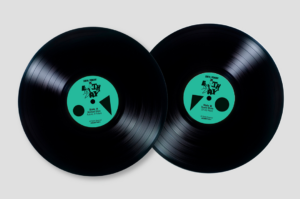 LONDON — A sugar-based alternative to vinyl could help to decarbonize the music industry, according to its developer.

UK-based Evolution Music says its bioplastic can be used to create records and is aimed at making it easy for labels and artists to stop using plastic without altering record pressing plants’ existing machinery or production processes.

Acting CEO of Evolution Music Marc Carey said sonically and in terms of equalization the music recorded on the bioplastic records is “absolutely spot on.”

“[In] the little bit of lead-in and in between the tracks there’s some surface noise. If you like that, if you’re a ‘70s fan, you like that little crackling, great,” he said, adding they are — to develop the product.

“We’ve got a unique recipe, but we are a (research and development) company — we’ll carry on with iterations of R&D to improve it,” he said.

Recording artists will be keen to change to bioplastic for their physical products, according to a co-founder of Music Declares Emergency (MDE), a music industry climate action campaign group that started as a declaration by nearly 3,000 artists ranging from Napalm Death to Julian Lloyd Webber.

“The production of vinyl is toxic in very many ways and there are all kinds of processes in it that are damaging to the environment, but we like vinyl. What’s the solution? Find a non-toxic way of doing it. Hey, presto, here we have it,” said Lewis Jamieson, a co-founder of MDE.

Sales of vinyl records have been growing over the past decade despite the popularity and instant access of digital media, and easy-to-use streaming sites such as Google and Spotify.

A richer sound, cover art, and the ability to cradle a vinyl record in the hands contribute to the growing emotional appeal for LPs.

“The music industry, the creative arts, should be at the forefront of innovation … and typically, cultural change is what affects political and social change,” Mr. Carey said.

The first record made using Evolution’s bioplastic was pressed at Press On Vinyl, a record manufacturer in Middlesbrough. It features “Atlas” by electronic duo Bicep, “Big Time” by Angel Olsen, “Bread Song” by Black Country, and “Back To The Radio” by Porridge Radio.

Mr. Carey said he believes as soon as one major recording artist or band opts to use bioplastic instead of vinyl, the industry will never be the same. — Reuters